Sambousek, a seemingly simple recipe. It all started out well.

Found the recipe on Pinterest, it sounded fantastic. According to the blog post where the original recipe is, it is a popular dish in Egypt, an area of the world I am not too familiar with culinary-wise. I’m trying to expand our palettes even more than we’ve already expanded them. I knew this was a dish to try.

I had the ingredients and set aside time to get things done. This alone is a win because I’m usually rushing. I already had many of the ingredients, great. Matt found Allspice for me a week or two before as I had been looking at various recipes that needed it and we didn’t have any at all. Otherwise other ingredients included Canola Oil, Salt and Pepper, Turmeric, Ground Ginger, Green Onion, White Onion, Cumin, Cilantro and others.

Like I said above, it all started well enough. I heated up the oil, a added the onions. Then I added the garlic and turmeric. The pot smelled SOOOO fragrant and delicious. I then added the ground beef, the other spices….

Then my first mistake.

I added the egg yolks to the meat mixture. I got cocky and so now they’ll be cooked.

I add them to Drunken Noodles and it’s delicious. It’ll be okay. One slip up…

Next was the phyllo dough. I hadn’t used phyllo dough since I last made Baklava during our Greek adventures back in 2017. From what I remember, it is very fragile and I needed to be super careful while working with it. I remember having to lay out some moistened kitchen towels to keep it from drying out too quick. So I did that, sprayed some down, I was ready to go….until I wasn’t.

I had forgotten to take the phyllo dough out of the freezer the night before.

Ah yes, reading the package directions, why didn’t I think of that…

I got it out, panicked, and then we decided to leave it out on the counter while we walked the dogs and see what happened. Our usual dog walk lasts 15-20 minutes. In my head that would equal the defrosting time in a refrigerator overnight. Makes sense, right? Nope, I couldn’t unroll it without crumbling. It was still very much frozen.

So we ordered out from Five Guys for dinner instead. Back at this tomorrow.

At least the meat filling is done.

The next day: Sambousek for Dinner

I had allowed the phyllo dough to slowly defrost overnight and was ready to attempt this again.

I cracked two more eggs, since the first two were in the filling, got my brush, laid out another kitchen towel, sprayed it, and opened up my phyllo dough. Seems ok so far.

I layered two at a time and instead of 5 inch squares I just went for the rolls that naturally divided among the sheets of phyllo dough. Next I brushed the first one with yolk and was ready to roll, literally, I just needed to spoon the meat filling onto the first one and roll.

That was a bit of a disaster, it crumbled, the meat fell out, it was just not happening.

Now years ago I would have panicked but from making Baklava in the past, a tedious dessert yet so worth it in the end, I figured this could become a layered dish.

I took the slices I had already prepared and layered them in a 9×13 baking dish, brushing with the egg yolk, and adding some of the meat filling, then repeated once more and topped with more phyllo dough. It may not be pretty but hopefully it tastes alright?

I placed the dish in the oven, crossed my fingers, and set a timer for 45 minutes about the amount of time I would bake Spanakopita or Baklava.

Then it was taste test time. First bite without the Garlic Aioli sauce I had successfully made the day before.

The idea is the same, just not rolled like the original recipe. I went back to the original recipe post and read that this can be done a number of ways. The author of the recipe just prefers to roll them. So I guess I fell into this method? The idea of folding them up in a triangle like a Samosa was intriguing though, and I may have to attempt that next time.

The original Sambousek recipe can be found here. But for convenience sake here you go: 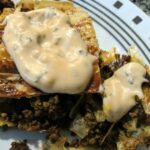 For the Meat Filling

For the Puff Pastry

We paired the Sambousek with a Lebanese Inspired Rice recipe I found on Pinterest. Click the link to find out more about that. And check out the Garlic Aioli sauce (not pictured here), which I’ll be finding more food to pair with because it is out of this world.

This dish used Cumin and Turmeric, two spices that I previously rarely used. Now it seems I’m always running out because I use them so often. I love them mixed in with eggs to add to an omelet with sweet potatoes and spinach, so much yum.

Are there any spices you never touched before, but now are a staple in your kitchen? Let us know in the comments!