Much like Halupki and Halushki, Bleenies are commonplace in Schuylkill County, Pennsylvania, but a term not as well known outside of the area. A quick google search will show you exactly what you need to find.

Bleenies we called them in Schuylkill County, Pennsylvania where I grew up, that’s what I’ll refer to it as throughout this post. Around the world they are known as:

Potato based, other ingredients vary slightly by region, culture, or religion, but the premise is the same. Grated potatoes, with something to hold them together while frying. I add onions to the potato for flavor, and hold them together with egg and flour.

Strain the mixture prior to adding the egg and flour to help them hold shape when set into the fryer.

Inspired by actress, Mayim Byalik, I once made them with zucchini and while Matt wasn’t particularly a fan, I loved them!

I used to use a large pan to fry them. While I was able to fry 6-7 at once and reduce the amount of time needed for cooking, I used more oil, and created a HUGE mess with all the splashing. A few stings happened from the hot oil flying out of the pan as I tried to place and remove the bleenies from the pan.

One day, I decided to switch things up and use a large sauce pot. I was able to get the height needed to cover the mixture with less oil, and because the pot is deeper than the pans, no splash!!! I can only do 3-4 at a time, but this way seems to work so much better.

Even within our area recipes vary a bit, everyone’s is the best, and no one is wrong. At Matt’s family’s church picnic, people will willingly wait in the humid July air for over an hour in line for their yearly purchase. The volunteers are drenched in sweat standing over a fryer for hours making them.

This is my mother in law’s recipe and may be similar to one you have seen or know, or may be totally different than anything you’ve made. It makes 12-15 bleenies, if spooning out a heaping spoonful into the fryer. 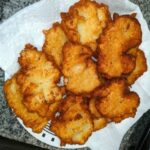 Matt likes to enjoy them with a side of sour cream, while I prefer ketchup, and occasionally sour cream. We did have them at Ballast Point once with applesauce during an Oktoberfest celebration. I also know that my great uncle, who is Jewish, eats his with powdered sugar.

Check out some other Schuylkill County Food Favorites here!

Are you familiar with bleenies, or potato pancakes/latkes/boxties, etc? If so, what do you call them? How do your recipes vary? Let us know in the comments!!

Potato Recipes Around the World

Growing up in Schuylkill County, I’m no stranger to bleenies, but I’ve never attempted making them. While searching on-line I found a few blog posts and decided this was the one I wanted to try. The instructions were easy to understand and the end result was just like those I experienced from block parties, firehouse fundraisers, and fairs around the county. We tried the food processor vs grated on fine vs semi-fine. We favored the bleenies from the most finely grated potatoes. Thank you grecobon for sharing your recipe.

Happy to be of help! I try to post the recipe instructions as I prefer instructions given to me. Glad you enjoyed them and yes the texture of the potatoes (grated v food processor) is certainly a personal preference! -Lora