The first time I had Chicken Cordon Bleu was in college. My roommate at the time attended culinary school in high school and decided to make us a fancy dinner one night. I remember how delicious it was, but for some reason waited over 15 years to have it again.

We decided to reembark on our Adventure Around The World via Food again that we started back in 2017. I asked on our social media accounts to select between the 6 continents with an actual population. Sorry Antartica. The eventual (after a tie-breaker) winner was Europe.

I had mixed feelings about this. While part of me wanted to dive into something super new, the other part was happy to explore some meals we were somewhat familiar with some fashion of.

We grew up with a lot of European, Americanized, food. The area we grew up in has a lot of Polish, German, Italian, and Irish immigrants. Not to mention the smaller groups like Ukraine, Slovak, Rusyn, and many more. So, we grew up with family and family owned restaurants making recipes that have been passed down through generations who came over from Europe so many years ago.

We visited an old favorite earlier in the week with Gyros and Falafel. Then it was time to make something new.

What is Chicken Cordon Bleu?

I always assumed that Chicken Cordon Bleu was French. Turns out, I was wrong. It happens once or twice a decade…

“Cordon Bleu” is French for blue ribbon. Under the court of Henri III of France, highest members of knighthood sported a blue ribbon [1]. The ribbon went on to represent the best highest standard of just about anything.

“Chicken Cordon Bleu appears to have no connection whatsoever with the great cooking schools of Paris or London. Instead it is an American innovation of quite recent origin, but one that draws from two distinctly European traditions. The story begins with Chicken Kiev, and authentic Ukranian dish…Made of flattened chicken breasts wrapped securely around seasoned butter, breaded, and then fried, Chicken Kiev became popular in the United States in the 1960s, first as a specialty of fine restaurants…Variations inevitably proliferated. Someone…thought of the Veal Cordon Bleu or Switzerland and the almost identical Schnitzel Cordon Bleu of Austria. Both consist of flattened pieces of veal folded around thin slices of ham and Emmentaler or Gruyere cheese (both products of Switzerland), then breaded and fried. A combination of the concepts for Chicken Kiev and Veal Cordon Bleu resulted in Chicken Cordon Bleu.”

Chicken Kiev you say? Another dish we love.

So turns out to have a combination of Ukranian and Swiss roots with an American touch. But from most of what I’ve read, Switzerland seems to be the origin most frequently linked to this dish.

Start with the breadcrumbs. Spread breadcrumbs on a baking tray and spray with oil. Bake for 3 minutes or until light golden. Remove and scrape into bowl right away. Your bread crumbs can be store bought, or make your own. I used crispy fried onions in addition to the bread for some added flavor.

Next Cut a pocket into each chicken breast. Fold the cheese in half and place 2 pieces inside each pocket. Do the same with the ham. Close the pocket, seal with at least 2 toothpicks. I used 3 to be sure.

Whisk your egg and flour, dip the chicken into that mix then into the breadcrumbs and onto your oiled tray.

For the Creamy Dijon sauce, melt butter over medium heat in a small saucepan. Add flour and cook for 1 minute. add half the milk and whisk until the flour mixture is blended in. Add remaining milk, mustard, and cheese. Cook for 3 minutes, whisking constantly, until thickened. It will thicken as it cools. Remove from heat, add salt and pepper to taste

The recipe I used has two options. I’m sharing the method I used. You can access the full recipe below. 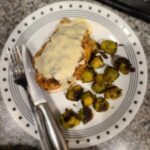 This recipe is originally from RecipeTin Eats. It has two methods of preparation. Below you'll see the method we used plus changes I made. Fort the original recipe visit the link below.
Course: Main Course
Keyword: Chicken, Chicken Cordon Bleu, easy
Servings: 2
Author: Nagi | RecipeTin Eats

*I combined bread with Crispy Fried Onions to create the breadcrumbs for this dish.  Two slices of bread plus the onions in the dry mixer of my Vitamix Blender **I used three toothpicks to be sure while sealing.

We served our Chicken Cordon Bleu with some Flemish Brussels Sprouts. A multi country adventure for dinner tonight indeed.

Some notes from the recipe author:

The original Recipe from RecipeTin Eats is available here.

How long is Chicken Cordon Bleu good for in the Fridge?

Consulting Taste of Home, as this dish consists of fully cooked ham slices and cooked chicken, it can be kept for 3-4 days.

https://t.co/Iy1zGuSckX This simple recipe will leave your family wanting more.