Usually when people think of potato salad, the image of a picnic comes to mind. The salad we think of is usually Creamy Potato Salad. It’s the one that if left in the sun just a few minutes too long will cause digestive issues no one wants to talk about. Though I love this version, and make it regularly, it’s nice to have some variety. German Potato Salad, Kartoffelsalat, has a vinegar base and is best served hot or warm.

While making Chicken Schnitzel for dinner this week, what better to pair with then a nice serving of Kartoffelsalat?

Put them together and you have a super fun word to say: Kartoffelsalat.

The more you know.

The recipe for Swabian Kartoffelsalat is from the website Five Heart Home. Check out their post for the original version, and the nutritional information. I have tweaked it a bit to my liking as you’ll see below.

We had a bag of your regular, every day potatoes already in the pantry, so I used those instead. It tasted great even with that change from the recommended yellow potatoes. I also am not a fan of regular white onion, so while I did dice a tiny bit of onion, very very small, I also made use of the fact that I dried green onions in the oven yesterday, and that was my excuse for using them in place of some of the chopped white onion. Again, I also had white onion, not yellow.

The recipe hails from the Swabian region of Germany. This region is located at the southern end of Germany, bordering Switzerland. This the part of Germany some of my family is from. Swabian cuisine can be described as simple and rustic. 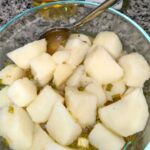 In my experience for the two of us, this doesn’t bode well outside of the first day. I cut the recipe in half and we still have leftovers. Hopefully I just remember to eat them in the next day or so. The recipe posted is the full recipe, but for just two of us, I used about half of each ingredient.

Will you give this variation a shot? Or are you sticking to the creamy style? Let us know below in the comments!

When we first got married, we could could make maybe 4 meals between us. In a meal rut, Lora started trying new recipes. We thought it would be fun to explore the world via food. Then Lora had the idea….