Shawarma and Greek Salad – So Good Together

Tonight for dinner we made one of our absolute favorite meals. Oven-Roasted Chicken Shawarma. We paired it with a Greek inspired salad we discovered years ago. They ended up a perfect pairing.

What is Shawarma? Well, according to Wikipedia:

Shawarma (/ʃəˈwɑːrmə/; Arabic: شاورما‎) is a dish in Middle Eastern cuisine consisting of meat cut into thin slices, stacked in a cone-like shape, and roasted on a slowly-turning vertical rotisserie or spit. Originally made of lamb or mutton, today’s shawarma may also be chicken, turkey, beef, or veal.[4][5][1] Thin slices are shaved off the cooked surface as it continuously rotates.[6][7] Shawarma is one of the world’s most popular street foods, especially in Egypt, the countries of the Levant and the Arabian Peninsula, and beyond.

We don’t have a spit obviously, so this is the oven roasted version of the dish.

The Shawarma recipe comes from New York Times Cooking. You can link to the original recipe and their information about this recipe here.

I started the Shawarma at noon, hours before dinner so that it could really soak up all the flavors of the marinade. I couldn’t help myself and kept pulling it out of the fridge to soak up all the wonderful smells of the cinnamon, cumin, turmeric, and paprika.

Then at 4:30 I turned the oven on to heat up. I took the chicken out of the marinade and made a few slices in each chicken breast before placing it on the baking tray.

I then sliced the onion into about 8 pieces instead of the recommended quarters. Not a fan of the texture of onions, I’m more likely to eat them the smaller they are. While the oven heated up, I let the onions sit in the marinade.

When it was time, I added the onions to the tray, and used the tongs that I had picked the chicken and onion up with to add some more marinade over everything and made sure to add more garlic from the marinade so really get those flavors in there.

After a long forty minutes of this amazing aroma of spices filling the house, it was time. I removed the tray from the oven and sprinkled the parsley over. I couldn’t wait to dive in. 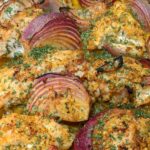 I served the Shawarma along with my very favorite Greek Salad.

Once it was time to fill the plates….I was ready…. The spices blend perfectly and the cinnamon hits you last. I wanted to eat way more than my stomach would allow, but can’t wait for leftovers on Sunday!

The salad goes great with steak as well. Give it a try! Post a picture on instagram and tag us! @grecobon #grecobon.

If you liked this post, here are some other recipes you may enjoy!

Also, be sure to follow us on Pinterest so you can save all of the recipes mentioned on our site!