Chicken Schnitzel – Not Quite German

When we began our journey Around the World via Food, I was most excited to have German month. I’m still excited by German food today, but don’t make it nearly as often as I would like to. I get in to this a bit more in the post about German Food. Chicken Schnitzel; however is actually Austrian in origin. It is extremely popular in Germany and therefore, usually associated with German cuisine.

For some other Austrian foods often confused as German click here.

Using these takeout dishes made everything extremely easy. I had previously used soup bowls and then tried mixing bowls. However, they proved difficult with the curved surfaces. These, we usually keep around for leftovers, were just what I needed.

I also snuck in a tablespoon of flax seed with the bread crumbs, they’re loaded with nutrients, rich in dietary fiber, and you don’t even notice they’re there. Why not? 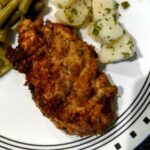 We paired the schnitzel with German Potato Salad (Kartoffelsalat) and green beans. I like to keep dishes colorful when I can, sometimes even the addition of some extra parsley or cilantro makes a difference. The green beans were definitely what this needed though. Last time I used peas. I think either work just fine.

I would also consider serving this with Lima beans; however, Matt won’t eat them…ever. I think Lima beans are delicious. What do you think? Team Lima bean or team Green Bean?

And for dessert I made my very favorite – German Apple Cake or Deutsches Apfel Kuchen.

Pumpkin Everything! 9 Dishes From Around the World